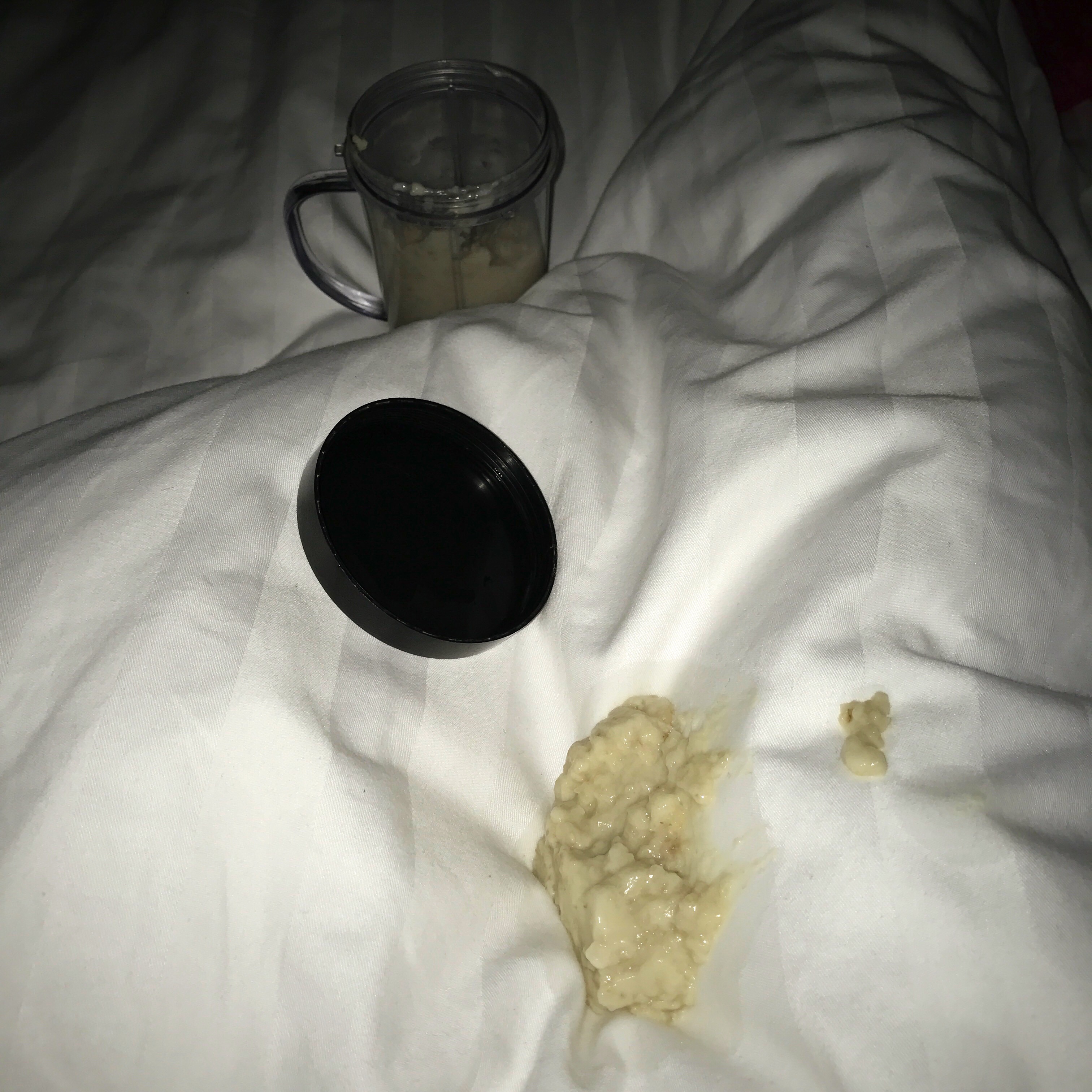 Although this picture insinuates I have been vomiting in my own lap because I looked at my husband when he just yawned in my face; it’s not.

Or one of my snot sneeze bombardments; nope. It’s a flat beaten alien which I caught in my sleep; this is how they look like when they run into a nightly Celestrous rendezvous.

Now I’m in big trouble though, because his family saw the whole thing through an outer space lookylook human being observing Zngatruluop mega telescope, while probably sucking on an human looking ice cream made of Zngatrulasci fluids and they’re really mad now.

Now fortunately for this knocked down slapped alien by yours truly; the ugly little thing should be happy he’s still alive and only looking a bit flat. So I really don’t know what the fuss is all about.

Well… it could have been! You see you can have: ‘Lap tops’, ‘lap dogs ‘ or ‘lap porridge’. Just a normal breakfast.

A hole inside your entire being

By now you probably are thinking wtf is porridge doing in your bed in the very early morning?

Did you know I’ve been an unintentionally involuntarily look a like of an anorexia patient. It never bothered me at all because I always looked great and slim. Although I always have been attentively to what I ate I always have been a normal eater. I liked pizza’s with four types of cheeses (especially gorgonzola!!!!!) and I could eat hamburgers with ease. In my pregnancy I ate 5 in one time; I even wanted to eat more, but my brother and husband dragged me right away from our MacDonald’s residence where I chained myself to my chair and table.

Normally it never did matter how much I ate, because I never gained any weight of it. After having a baby (1993, I was 26y) it came to the point that every day my body got eaten up by mysterious inexplicable hungry demons which resulted in chronic nutrients deficiency and every bodies dream: weight loss.

Now because of these uninvited shitty omnivore creatures in my body which feels much like having a hole inside your entire being producing all these terrible embarrassing empty stomach noises sounding like multiple earthquakes are going on all at the same time, I continuesly have to take care that I keep eating because most of my nutrient’s dissappear inexplicable immediately.

That’s why you would always find me with swollen cheeks eating and do I have to take 80 times a day an extra portion of oatmeal which gives a lot more nutrients than 38 bags of chips, 94 chocolate bars, 229 pizza’s and 1 medium sized guinea pig (yes they eat them in certain cultures); I’ve tried that all (except the guinea pig) and I stayed just as skinny as ever instead of my goal to be as Kirsty Alley (in her fat periods).

This necessary oatmeal I drag along when I’m out, like a portable cat just like Taylor Swift. Only thing is that I’m not petting it that would be weird, I smother it in my purse because it’s a non living big beaker, so I can secretly slurp it unabashedly when I’m somewhere, which is totally not easy to do when you try to hide the fact that you die if you don’t should eat every second of the day.

You have to conjure up the bin in the middle of a crowded shopping mall to slurp oat porridge from it which makes you look like a drunk trying to obtain the last drop in the bottle, because oat porridge can be very thick so every time you sip it you have to throw your head very backwards and crushing the beaker against your lips as if you look like an oat porridge junkie busy on his last meal on earth and do you also sound like some god forgotten scumbag who throws up in his Magic Bullet beaker and right after that sucks it right up again just like you would do if your straw would be constipated by maggots when trying to obtain your cola.

That’s only one embarrassing oat happening (which I’m totally used to now by the way; I now even wear this sticker on my forehead warning people that I maybe could be stealing their bag, or puppy if they have one, if I’m in an all-my-food-is-already-eaten panic condition, but sitting in a restaurant is no joke either.

As we all know: you go sit in a restaurant to consume some liquids or eatable stuff there so the owners of the establishments can eat as well at night (and hopefully the rest of their life), because otherwise they would be broke and probably would be busy counting puzzle pieces or watching re-runs of Lucy (well I would) all day.

As I enter the place I always have my own menu brought with me: special sour bread without yeast, lots of oat porridge, dried figs, apricots and dates and a disgusting awful mixture of mung beans puree looking like vomit (no joke). 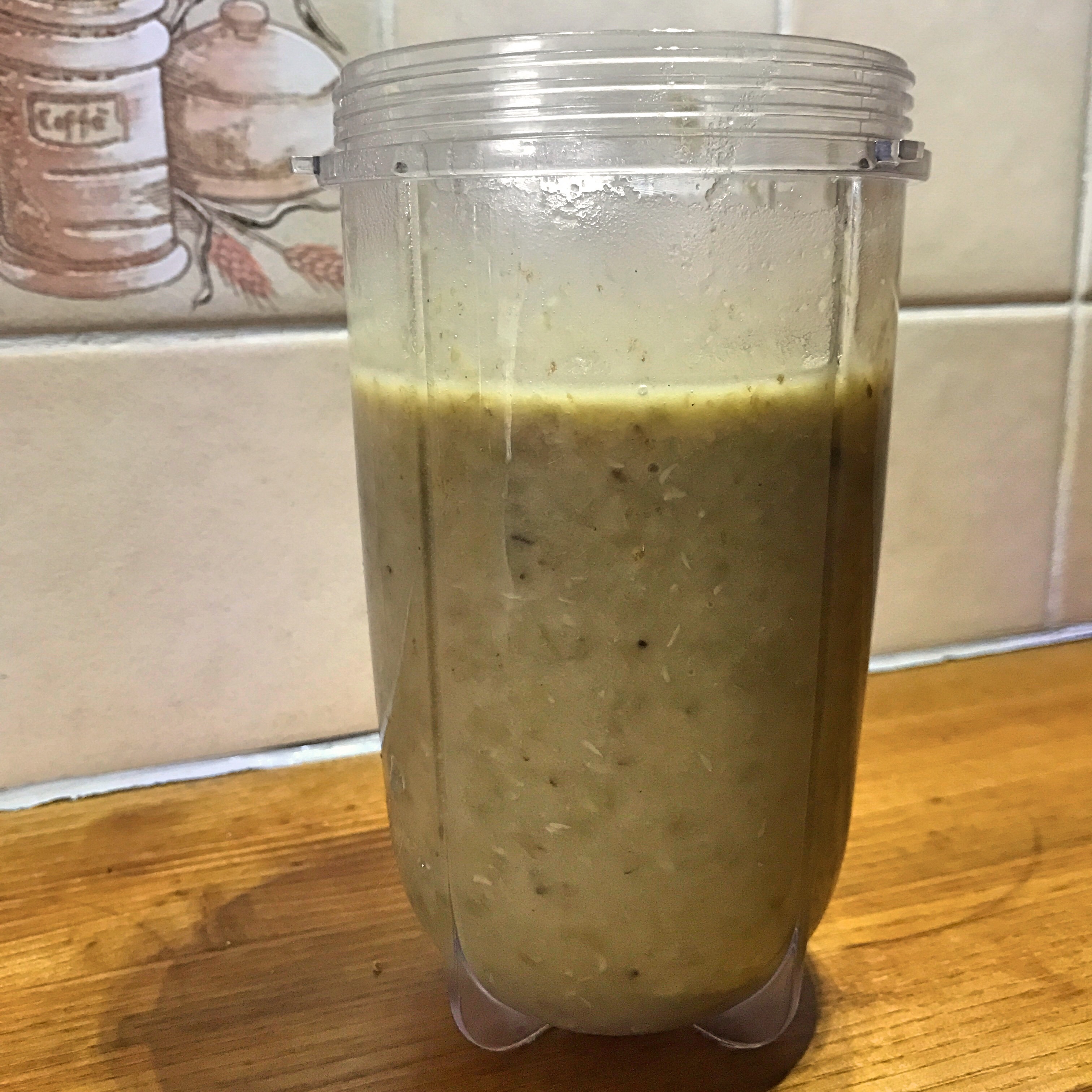 This whole arsenal of life savers I all squeeze into my bag which I also try to cover up just like an alcoholic does with his alcohol covered in a paper bag just like in the movies so I stole that idea and adjusted it to my forbidden food in restaurants issue.

When I’m sitting in a restaurant it’s not like I’m enjoying and can relax myself a lot because I am continuesly on the lookout to don’t get caught by some waiter to be bowled out the place; that is if I’m not getting thrown out already with my mom because of vociferous and inappropriate behaviour (which is standard also).

After I order my herbal tea and having answered the waiters question of “do you also want something to eat?” with “uhhh, nope, not really, not very hungry” (wooehaaahaa really???!!) I subsequently dug under the table, because I’m starving at that point, to take a sip or bite of whatever I have planned for that moment which I then take out of a plastic bag (because ofherwise my whole bag becomes one messy sticky oat and mung shAt; also did I already mention that the bag weighs a ton so that I always walk like Hunchback of the Notredame, yes that). And those acts 80 times over in the three quarters of an hour we are sitting there, well technically for me it is not really ‘sitting’ but practically roaming on the floor examine all the gum that has been stuck under the seats and watching if there is an awesome snapchat opportunity shot that is revealing itself, since I am undercover anyway and can function as a candid camera which always had a lot of success on Snapchat, but now not anymore because I sort of quitted Snap because nobody is staying there anymore, and where I’m hiding for evil waiters and waitresses who sometimes suspect me and think “omg: it’s one of those social anxiety individuals reaching for another round of xanax”; no offense to real social anxiety peeps but you know I just see them think that because I was a psychic remember (really convenient sometimes) and mostly think of me of being a total lunatic, which I don’t mind at all, because I always think they’re lunatic also, like whose not.

How to spill porridge in bed?

So anyway; ten double multiple oat meals on a day means also one in the very early morning like half past six. It used to be every ten minutes during the whole night once (not a joke; non of this is a joke!) but fortunately and mostly blessed that is over now.

And since I now have enough of this oat topic, I owe you a blog about why on earth my body is craving for oat every second of the day. In one of my future blogs maybe more, alright? I said ‘maybe’ ok.

That’s why we’re now at the revealing of how in the name of the Universe I spilled oat in my lap in bed.

Well in fact it’s not as spectacular as you would think waking up still sleep dizzy and my eyes half closed in total darkness.

We were still in our holiday resort and from time to time I had to repack my brain chaos (at least the left overs), because I didn’t know where the Blieb I was. I have this orientation capability of zero so sometimes I delusion myself in a totally other time zone and/or place being all young again (not that I’m not young now, but you know a tiny bit younger than this) waking up all relaxed and knowing that you don’t have to chase money that day to buy all of your health back again because you have enough of it in your pocket and you stretch out your arms in the air with the early morning thought ‘ahhh life is beautiful (which equals life is good for me).

Ok, now, forget about the arms: sitting in the early morning darkness I grabbed my porridge aside my bed, twisted the cap off the beaker and just poured the bunch along my mouth and chin where it didn’t even touched my face because I forgot to put the beaker against my mouth.

Result: oat porridge in my lap and a husband next to me with stupid questions and remarks like “what are you doing?”, “Maybe you were still a bit sleepy” on which I responded with “eating my porridge” and “no I wasn’t sleepy; I was perfectly awake!”. So he says: “Well then you’ve got a screw loose!”. Excuse me, I’ve got a screw loose?! If someone has a screw loose it’s my husband; he is the one who talks to our cat with this highly idiot squeaky voice as if he’s an helium addict. I mean REALLY squeaky voice that breathes a cocktail of aliens, travesties, smurfs, Lalas (you know from the Teletubbies) and the sound which comes out a man’s system when you kick his balls real hard (I’m an experienced kicker so I know the sound real well).

So actually my loose screw isn’t really that bad, facing the fact that he has this permanent squeaker talent which annoys the crap out of me, I even think this is even a case of having this screw tightened real fast and it’s not even loose at all.

Ps: Zngatruluop and Zngatrulasci don’t exist; but I guess you figured that out by yourselves