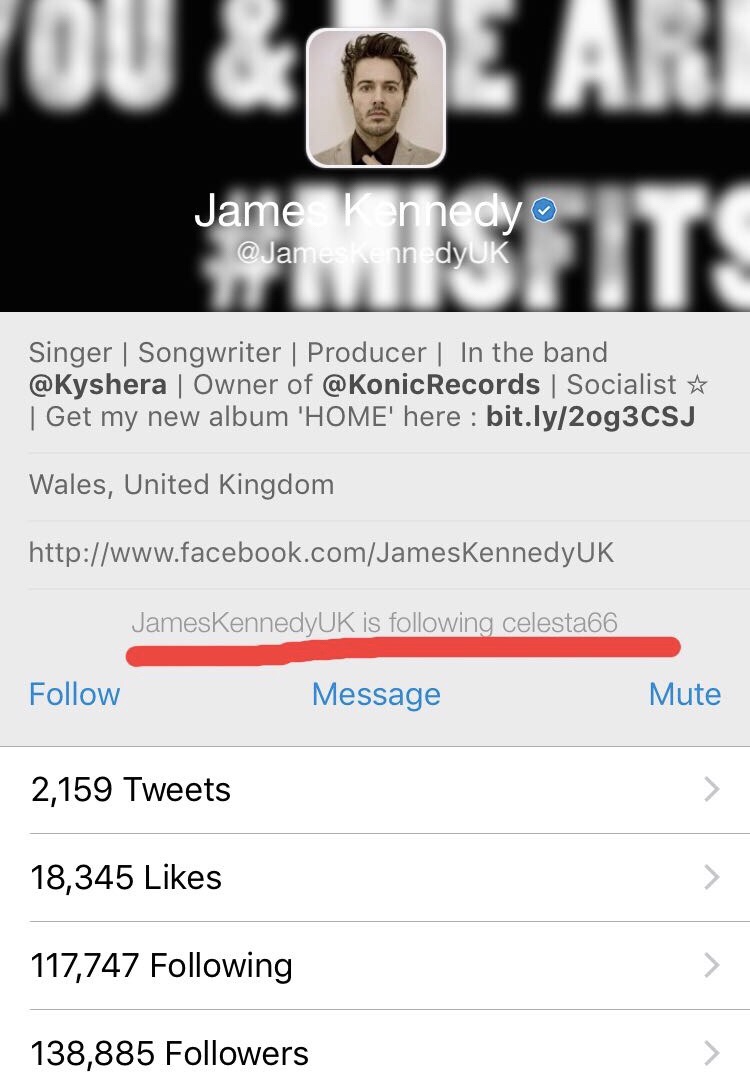 So once in a while I feel very important on Twitter. I should be; I am there since the last 10 years. I am a total Twitter-veteran with the lowest Tweet volume ever.

Anyway those momentous whiles are the times a verified account starts following me without me even following them first. Now isn’t that flattering.

Verified accounts; that is no mean achievement to get followed by the upper class human beings. Then they really must like you very very much. Did I already mention ‘very’.

Being ‘verified’ is the real deal; then you are officially documented, established and all that jazz. Then you have become an absolute real human on the planet of this earth. Or vice versa.

After 10 heavy years on Twitter nowadays I hardly look at who is following me anymore; unless you interact with me ofcourse. Then I probably will be waving back at you; unless you have something important or interesting to say to me. Then I will be winking. Maybe.

But sometimes it comes under my attention (because this notifier keeps flapping this new follower up and down my screen) that a handle inclusive blue check mark is following me.

Well that means first I didn’t know he had a blue check  mark, but because I saw this interesting name ‘JamesKennedyUk‘ I thought “hey would he be family of the Kennedy’s”, which would have been awesome because if you are being followed by the rich and famous it automatically makes you famous too for them and then you can all be like well I’m famous at the Kennedy’s house, they know me, they see when I’m going to pee in a fancy restaurant and when I drink a juicy glass of boiled e-coli bacterie chlorine water at home. They experience all my updates with lots of….well don’t exactly know what to write here, but I think perplexity can be the word for it.

But despite that I stay totally down to earth.

Then I pushed on his name and checked in Twitter where I instantly was raided by the blue check mark on my beautiful retina. I almost fell of my chair, well actually I was in bed but it sounded more spectacular, and I screamed rather loud “heyyyyy I got followed by a Blue Check Mark” as if this person was named Blue Check Mark and didn’t have any other name but Blue Check Mark, which ofcourse is the absolute case. Although it would be strange to have flipped your name which should have been more reliable if it was ‘Mark Blue Check’.

Anyway as I lie in my bed recovering from this very important follow, Jack asked me who this person was because I reacted in an exceptional exhilarated way. Then we get this conversation about this really being an exceptional highlight compared with other climaxes in our life and Jack (for once) didn’t have any contradiction.

“Look!!” I said with my most enthusiast and confident voice: “James Kennedy, singer, songwriter, producer, in the band @kyshera”. And then suddenly Jack remembered and yelled: “yeahh ofcourse the ones from the super hit ‘mashed potatoes in my hair’ back in 2003! I even bought that in a real store because you couldn’t yet download a lot of that stuff back then”.

So glad finally Jack knew who this verified dude was which made me all “yeahhh ya see now you remembered, that was some great hit wasn’t it and I even got you the same hat as in one of their video clips, you know the one which got stuck between the elevator doors that time because I sort of pushed you out of the elevator when you were obnoxious and then I pulled you right in again.

Then all of a sudden Jack gives me this weird look, just like when I just had shouted “heyy John over here” at a certain Dutch female vip in the period we were still working on the red carpet (I’m not really good in human faces recognition scenes; it took me ages when I finally recognized Beyoncé and Angelina Jolie), and husband stared me annoying enough (do you say that in English, it’s a Dutch way of speaking) straight in the eyes and said something like: “I don’t have the faintest clue of who this guy is and that single doesn’t even exist, I made that up and you my dear sweet Celesta……”, the rest I can’t remember because I already slumped through the ground 8000 meters.

And then the conversation took a rather annoying turn because of course I could not explain the elevator thing with the same hat as this band and I also didn’t have a clue who this Kennedy person with his singalong band was.

So we searched on their website and saw they are a real ‘MOVEMENT’ ya’all, whatever that means Kyshera. And whose name did you use for your band name anyway? ‘Hard Rock songs, chock full of heavy riffs, hooks & audience singalongs’; but I’m pretty sure they mixed ‘hooks’ up with ‘hooker’ singalongs though. But I’m no musician; I wouldn’t know.

‘One thing is certain though, Kyshera will continue to be a band who are innovative, exciting & like nothing else out there.’ Well what to say……; I don’t know them, we don’t know them. I’m sure they do know them.

But enough about the band; why are you following me? That’s the big question (after the big question of why babies are being born out ‘there’ and not out of your mouth like vomiting this human material). (Don’t tell me you never asked yourself this question?!)

What brought you to my Twitter space? It most certainly was not my sexy looks, which already has been in decayed condition or my extremely notable tweets which could have been more interesting and noticeable if husband would let me tweet about why the Pope is named ‘Pope’ and not ‘Poop’. And for example my conversations with our house ghosts, which probably would not be approved by the Pope.

I think I do know why he has started to follow me; it’s most obvious isn’t it? I’m a blogger remember; he must have read some of my crappy stuff and maybe he was interested in my ‘Black Hooligan Snot Camouflage‘-article, which I can understand could be a real hide-for-your-fans-outfit or maybe I-am-to-ashamed-to-awknowledge-I-make-lousy-music-with-my-band product. Which I don’t know ofcourse because I never listened to his music, but probably isn’t my style anyway so that’s why the label ‘lousy’ in advance.

Anyhoo I’m sure he is impressed with my writing and is for sure becoming one of my fans.

My daughter thinks he has a robot follow thing turned on; she doesn’t even know him. Now at this point normally I would write something like that she’s jealous, but you know… in this case I can’t because she’s famous herself and has lots of fans chasing her (via really long lettered emails and stuff) herself so that’s not going to work.

So instead I asked her “say, when are you finally receive your blue checkmark after being in the picture for nine years?”. That will teach her. 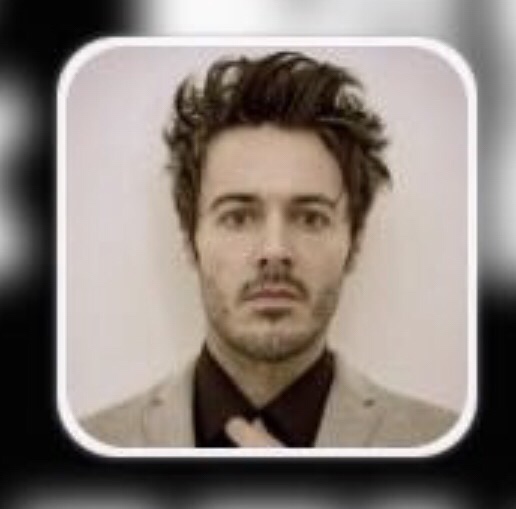 And also: what’s up with James’s profile pic on Twitter? Normally I won’t judge people on their appearance, but you don’t have to scare me dude. Maybe on your next profile picture a little smile, if that’s possible, should be great to attract more fans you know.

Nevertheless; thanks for following me, or has your robot already unfollowed me again? Let’s check it right now. Nope: at this moment I am still your idol. Oh……and sorry I didn’t follow You back. No hard feelings, I hope, we still can be good?! My ‘follow-back-button’ doesn’t work, sorry.

Also: I think you should probably retweet my blogpost James; since I am your idol and all. I gave you a round of publicity, because apparently your pr people suck and I gave you profilepic-tips aswell. You’re welcome.

Also: if you don’t retweet I could always trace you down and get in contact with my media friends to throw out a stalk article about you and your hooker band, or was it hook band; because your website says: ‘Kyshera are a band who have fully embraced the modern era and are heavily involved in their social networks & engaging directly with their fans’. Did you read that James? ‘Heavily involved in their social networks’ equals ‘I retweet everything that has to do with me’.

Ohhh crap; I just realized you are not going to interact with me if I’m not a fan. Oh wait, now I think about it I maybe am a fan after all. You know what: I follow you back (thoughts nobody ever should read: “ohhh nooo, I don’t want to follow him back, because….., because just I don’t wantto. Ohhh what the heck!”) Ok I just followed you; so now I am your fan too and you can quietly retweet this post.

Ps: ‘mashed potatoes in my hair’ was a disturbing fake title of Jack; I had nothing to do with it

UPDATE: I saw you accidentally unfollowed me @JamesKennedyUk. I thought I inform you immediately, because this could cause issues in your life. Now you miss all my updates; how are you supposed to know when I’m going to experiment with oat and roasted pill bugs or climb the Mount Everest; I’m a chronic fatigue person you know; it would be an amazing accomplishment if I succeed. But as I think of it, I probably won’t. Well what if I get stuck with my nose between the elevator again, which occasional happens, I need you to support me you know.

And what about my whole PR campaign for you? Doesn’t that mean a thing to you? I’m very disappointed at this point James! We could have been real good friends; my husband even would have sent you some free  coffee. Now you miss out on all the good stuff!
At this point: I suggest to check your account James, so you can put me back up in your idols list again.
See you next week ok?!
Hugs Celesta 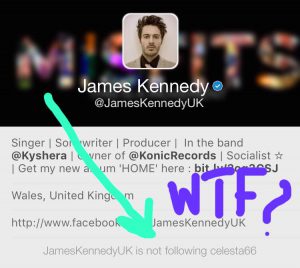 Part 2 ‘You got me confused James’