I like attics. A lot. In our other house we had some sort of attic, but in our new house (now 18 years old (1999) so not so new anymore; don’t know why I still call it ‘new’) we don’t have one which totally sucks.

Now we’re on a little holiday and: we have an attic. That was the enthusiastic version. It lasts until daughter hopped on the bed. 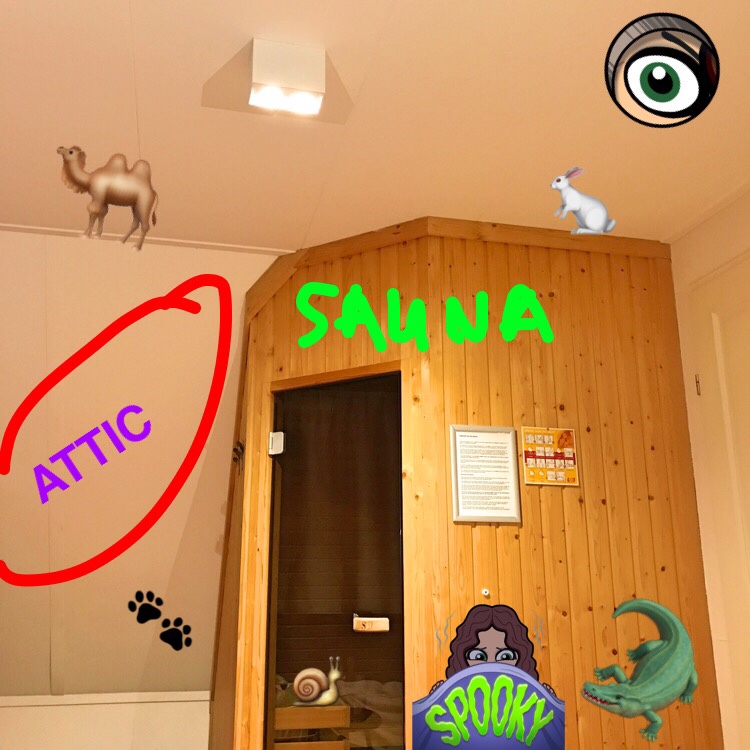 She lay quietly besides me staring at the ceiling. Very suspicious. With a sneaky voice she started the conversation: “this is an attic doesn’t it”. Me: “yeahhh, cool don’t you think so?!”. She: “yes nice”. And then came the rest of the sentence: “looks like it has some sort of other attic on top of it”. That was a smart observation (sarcastic). Me: “yeah looks like it”. She continued: “what would be hidden behind those panels?”.

Bang. What did she mean by that? What would be hidden? Do I have to worry about the rest of this conversation?

She: “maybe there are abandoned pets on there”

Me: “they would be dead by now. Or maybe dead rats or naughty children who got punished by their adoptive parents who after all discovered that they choose (or got) the wrong set of kids from the agency. Kids who occasionally ripped of the cute little dogs head, because that is what you nowadays do to get a viral video on YouTube or Facebook, who are both to blame for that weird behaviour from today’s youth which go beyond pretending to play shop or knitting a 60 meters long scarf.

It could also be our dead rabbit (read also ‘fake botox long ear rabbit‘) which we had stuffed apparently against his will because he seems to hunt our daughter down in her sleep where ever she goes.

Or maybe even trapped ghosts entrenching themselves on that attic and got the location wrong on their afterlife TomTom, who are functioning like some sort of ghost inspectors whose job is to make sure you may join the allready-dead-family-members-section someday when it’s your turn to go (that will be at least over a couple of hundred years); so I’m not sure what the criteria are, but I assume robbing an undeserved millionaire would be ok for them and now the phantoms can’t get out anymore.

Then I instantly decided to strike the pillow talk, because I could feel this leading to eerie conclusions. And I have to sleep in the room for a whole week to come.

Well….too late. Every time if I lay down the bed I couldn’t help looking at the attic on top of the attic.

So the whole week turned out to become a week of all horrific dead bear sounds, sucking iPhone battery ghosts, creepy feelings and flying illuminated bulgy eyes all over the place.

After I took a hide under the bed, where I lay completely rolled flat, it was that I discovered it was Jack still having a nightmare over the online ordered groceries which were never delivered to our holiday cottage.

At second thought; there maybe a little chance the groceries could be in that creepy attic after all. But I think that’s not the case, clear prompting, because it is a very closed attic and nobody can enter.

Except if you are an alien type; I’ve heard they can go through walls just like ghosts. But I’m pretty sure they don’t deliver your groceries to an outdated semi-soft accommodation, because they don’t do shopping, I assume. They don’t eat, they suck your iPhone battery totally empty as happened the night before so hypothetically they could be there hiding for unknown reasons, together with the ghost inspectors.

Anyway the whole room felt kind of scary, especially when you totally can not place the diverse mysterious sounds; which makes me all stressful, itchy, wanna eat cheese (but of course that’s too risky), sleepless and paranoid.

Then I remembered I’m a Blieping psychic who should get rid of demons with the blink of an eye. But I had infected tear ducts so obviously that wasn’t going to work. So instead of blinking I tricked them in the sauna, did 6 liters (1 drop) of eucalyptus oil on the artificial coals and put the heat on infinite, because garlic and sage weren’t available plus I didn’t want my room to smell like hundred midgets had fart in it.

Then the unthinkable happened: I got stuck with my toe between the wooden logs in the sauna while I dropped more than the recommended amount of eucalyptus liquid oil; about the whole bottle.

There I sat by myself waiting until anybody should turn up to free me, because everybody was downstairs and when I should scream nobody would hear me anyway because that I tried before one time when I couldn’t walk anymore due to muscle strike and I wanted a cookie to eat upstairs.

So that wasn’t going to happen; now just waiting together with the inspector ghosts which probably now already had decided not to give me a future entrance to their dead club, since they would not accept a clumsy retarded and failed ex-superwoman who can not even keeps her feet in a normal way on the ground in a holiday bedroom sauna.

Meanwhile it started to become a bit cloudy in my head probably from sniffing too much eucalyptus damp. Which resulted in a rather shameless behaviour and I started to insult the ghosts all of a sudden.

Eucalyptus-stoned I strictly addressed them to get the F out of this attic, otherwise I would catch them in a bottle and bury them next to one of the city’s cave where nobody should ever find them and that I most certainly didn’t want to be part of an allready-dead-family-members-club managed by inspector ghost suckers who hunt people.

While I was busy yelling and threatening the invisible plasma’s, the door of the sauna suddenly opened and it was Jack standing there with €50 in his hands. Apparently some dude of the holiday resort had come to our cottage to give us a €50 discount on this accommodation and nobody knows why. “Well that is absolutely justified”, I said; since they rent out cottages inclusive free attic ghosts.

Anyhoo during this conversation I saw the ghost inspectors flowing right out of the sauna, but it was more like escaping from a weird living woman than from being gassed by Eucalyptus oil.

Me on the other hand was totally sloshed hanging with my upper body outside the stupid heat box and my toe still stuck in the wood gasping for fresh air; did I mention I hate sauna’s and never go in one: then I get the stuffy feeling and become claustrophobic. Well all in all that didn’t happen because I had other business to take care of inside there so I probably forgot to get all hysterical.

I’m not sure if I got rid of the little Caspers, because I never heard any strange sound again; except from the huspup maybe, dreaming about getting toes out of a sauna panel using two knitting needles: nobody knows why.

Update: the bear sounds was apparently the wind doing its version of ‘Silent Night’, but then way overrated.

Also our Persian cat at night decided to go on dead stuffed rabbit ghost sniffing hunt in the form of illuminated bulgy eyes.

Read also This can happen when… or Caught in the..