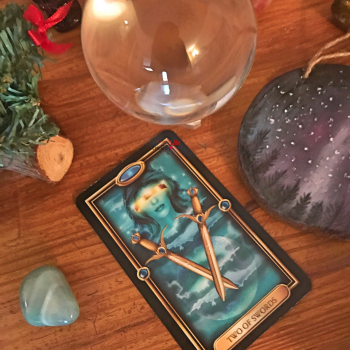 Whether you like it or not; sometimes unwanted interests are going to impose to you anyway until you accept them. Believe me: kicking and hitting really doesn’t help here. I had approximately 41 years of experience in commanding tarot/psychic feelings to take a hike to Timboektoe, but it didn’t help.

It saves a lot more time (and stupid life lessons) when you just say to Mr. Universe: “yes please, almighty Unitrouble uhhh Universe. I will do anything you want me to do”. Because if not, life is gonna sweep you through the planet back and forth and serve you all kind of delicious situations to show you that you are going the wrong way.

How to prevent that from happening?

2007 was the year Tarot imposed itself up on me; whether I liked it or not.

After 41 years of resisting feelings towards this mystic form of gaining hidden and/or forgotten knowledge about life; it apparently presented itself to me anyway. This sentence is describing it in the most delightful and delicate subtle way possible. Truth is that those years were full of non comprehensible stress, sickness, scolding to doctors and surviving the days But I don’t want to scare you so much.

At second thought: I do have to scare you because otherwise you have to go through shat aswell (yes shAt).

So wannabe Idols and X-Factor singers: if you CAN’t sing, you CAN’t sing if experts tell you that!! No offense to your ambitions: but you better listen to them and go figure out what your real talent is in life.

A British documentary was the deciding factor to explore this celestial card game and suddenly made totally sense to me. This new way of living suddenly opened doors and I found out that tarot reading was not quite so simple as I thought.

From age 11 until I was 41 Tarot was absolutely not an occult topic I was interested in at all. Ghosts, on the other hand, intrigued me the most. It took me a long time to figure out if I wasn’t one haha.

Although I grew up on paranormal fairs, I only found it intriguing to see what psychic people were capable of. Could they point their finger to someone and give him a frog face, that would have been real convenient. Could they unseen enter your brain to adjust a couple of wires so I could learn to do the same thing at people. Then I would let annoying sujets (= subjects = people) stand in a large row and let them clap for me all day long if I would pass by. But maybe that would be in itself very annoying for me. Maybe I only would let them wave to me; but I would not ever wave back because they are annoying people.

I always believed in paranormal psychic abilities but pertinent NOT in a ‘woo woo’ thing like Tarot!

I always had a really good time at all these fairs; I enjoyed the kind of energies and Caspers that flew around and it made my childhood period and adolescence really magical.

Although my mother tried to stimulate my spiritual side very much, I didn’t have any intentions at all to do something with it.

I tried very hard to ignore any form of psychic abilities, but I didn’t seem to get out of scanning other people.

Wherever I went and met or even saw other people I looked into their eyes and often instantly saw what took or takes place in their lives and how they felt or feel.

Which wasn’t quite fun to do if you have no control over it. Knowing that somebody dropped his glasses in the toilet where it landed straight into his own shit; was not the kind of clairvoyant episodes I wanted to experience.

On purpose I always tried to shut off my psychic system from people on TV and people in real life and especially phone calls.

I often really could not talk or better said, listened to people without seeing a whole story behind them which I didn’t want to know about.

So you notice that I certainly was not hooked on tarot the very first time I saw it and moreover: I started my own (coffee) business in 1989 and only had other entrepreneurial aspirations.

But for everything in life is a right time and if I liked it or not; at the moment I got sick (for a year) in 2007 (on top of the already 14 year during sickness I had), I just instantly was drawn to this very Magical card game.

Maybe the reason I necessarily became non-(over)active, was because Uni-Thunder (also known as Universe) tried to tell me I should consider exploring the spiritual side of me anyway.

All those years I pushed it away from me on purpose; despite the hints my mom gave me already when I was young didn’t have any effect on my determination to choose another kind of ambition. And like often: moms are often right about things and at all if they are psychics themselves.

But the very moment Tarot sank into my brain, I was instantly sold at this magical way of looking at life. This time I didn’t have to think twice about it and I just followed a wonderful mysterious bliss that suddenly was going on in my mind.

I became in some kind of trance condition and could’t wait my husband bought me my first Tarot deck. From then on my Tarot journey took off, allthough I was still slightly supressed and didn’t give eventual psychic abilities the chance to come to the surface.

Initially I still was in the resistant mode. There I sat on the couch, on which I was glued on because I had a hard time walking, and said with a crestfallen face: “but…., but.. I am not really your fantastic type of spiritual wonder you know!. I think you’re mistaken. I am very stubborn and my mom used to be a scallywag you know. You certainly don’t want me to shake people insane with my typical kind of view of this world.”

Well, I played with the cards anyway because they were also glued on my hands. I had no choice you know: it was not my fault!

At the moment I got into Tarot I agreed with myself that although I now worked in the spiritual field after all, I again didn’t intend to use my unused and supressed psychic abilities this time either.

I felt that I wanted to stay rational and intuitive combined, rather than psychic about Tarot readings. Reason for that was a simple answer: fear. I still was (still am) fearful of seeing too much of a person which I don’t want to see. I can’t really explain exact why and what is going on in my mind. I just don’t want to know very much or delicate things about people.

Which is a good thing I think; otherwise I would constantly having nightmares and slapping Jaco in my sleep so he would end up having a chronic form of Blue Eyes disease. And I hate blue, I’m the green type of person; but after a blue eye always comes green or at the same time, I know, but still I like only green better, but not around the eyes but in the eyes: so the actual eye. We wander off here.

The only way by approaching tarot as static as possible was by reading a lot of tarot books. I also hate reading, but I had no choice because I was lying on my back all day and did not want to develop myself in a TV-addict.

The very first times I looked at the cards I didn’t pay any attention on any symbolic meaning. I didn’t care; I just wanted to know the meaning of the overall card and started remembering the overall look of the card. That was an immense hard thing to do and despite my very good remember function; it didn’t work at all.

I figured I’d wanted to integrate psychic visions during a Tarot reading slowly in time when I would be ready for it in the future.

I started out as a reader incognito online (so they are not aware of my chronic lunatic tic) and instantly became successful at that. I spent full days with the Tarot and anonymously helped a lot of people; something I had never done before.

This gave me a lot of experience and I received a lot of requests which I could barely keep up with. The readings which I did for people were a great success; I got the most moving e-mails and thanks from them. People were full of respect and gratitude that I had pointed out certain things and had helped out. That gave great satisfaction and also I experienced the puzzling with tarot cards a huge challenge which suited me very well.

As wishy washy as I once found the matter of Tarot; it suddenly took up a very serious place in my life.

Being an coffee entrepreneur since 1989 suddenly became of less importance and since then I am fully engaged with practicing and continued studying the wonderful insights Tarot can give.

So if life is fooling around with you, you better make a change right away while you can. It’s the Universe’s way of saying: “wrong path dude: change directions! NOW!”.

It saves you a lot of time and crap experiences if you just listen to the sucker.

The easiest way is listening and the roughest way (as I did it) is ignoring and plough through with all its (not fun) consequences.